Mouth sounds, especially from other humans, fill me with rage. For some reason, the sound of another person chewing is a sound that I can hear 10 times louder than voices. While some people wince at the sound of nails on a chalkboard or rubbing styrofoam squeaks, I shudder, shake, and clench my fists at the sounds of chewing, teeth grinding, ice chewing, slurping, excess saliva, chomping, and deep breathing while eating. Interestingly I’m not grossed out by burping and farting sounds though.

My husband and son think I need to go to an audiologist because I always say “I can’t hear you” to them. Meanwhile they say they’re talking at a normal or higher than normal volume. My husband thinks I listen to the tv on a volume twice as high as a normal person. I also try turning up the in-ear volume on my phone even though it’s on max volume – it’s still not loud enough for my comfort level.

I say all this to admit, that maybe my hearing has deteriorated over the years. Maybe it’s an issue with so many sources of sound, that I want the one sound I’m supposed to hear, to stand out much more than all the other noises.

I was validated when I learned that there’s a name for this and it’s Misophonia.

Do you know anyone who can’t stand mouth sounds? Tell them they’re not alone!

Even though this drives me NUTS when humans make these sounds, I think this guy is really cute and his chewing doesn’t bother me at all.

I hate loud chewers, but I could watch this a million times. 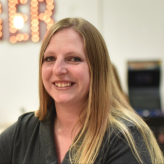 I’d Like to Speak to a Manager Please — Part 1