Would you hate me if I said Thanksgiving is my least favorite holiday? It is. I’m not a grinch, I’m not an ass. I’m a realist.

I do not like Thanksgiving food, period. I do not eat turkey. I have no interest in stuffing or cranberries or pumpkin pie or any of these traditional Thanksgiving, fall foods. The best I could hope for as a kid is that someone would have mashed potatoes that weren’t doused in butter and had absolutely no gravy on them. Most years, my Thanksgiving plate consisted of bread (no butter) and sometimes mashed potatoes. As I got older I started to tolerate the taste of sweet potatoes, but the texture made it hard for me not to barf. (I know I know). I had no reason at all to like Thanksgiving — except my Uncle Denny liked it. Thanksgiving always fell close to his birthday and we celebrated Thanksgiving at my Uncle Denny and Aunt Jacquie’s house growing up. Their house was full of my family (no complaints there) fall decorations (that I really liked) and usually included a birthday cake and/or pies for my uncle. Besides the food, and my pickiness, when I think of Thanksgiving as a child, my favorite memory involves all the hours my brother Bobby, cousin Josh and I spent making paper chains out of 1 inch strips of construction paper and scotch tape. As we got older, the paper chains got longer and longer. They stretched from the upstairs to the downstairs, wrapped around the living room, wound back upstairs and then began to be stored in black garbage bags for transport the following Monday. My uncle was a high school teacher and took these paper chains to his classroom and hung them up every year. I love a challenge and I love tradition, so this was my absolute favorite thing to do on Thanksgiving as a kid.

As we got older, we stopped making paper chains, so the only good thing left about Thanksgiving as a young teen was the mashed potatoes. I know that sounds bad, but I like other holidays — just not Thanksgiving, especially anymore. I am thankful everyday so I think it’s a little odd to pick one day a year to be ‘extra’ thankful. My favorite holiday is the Fourth of July because freedom and independence are things I think we should celebrate more often than we do. (See there’s logic to my madness; I’m not just a grump.)

Into my 20s, the Thanksgiving holiday was still at the bottom of my list of holidays, but at least Black Wednesday was a great time for a lot of drinking and reconnecting with friends you hadn’t seen in awhile. Once the drinking got old, and I got old, Thanksgiving was still just ‘blah’ to me. And then I saw Talladega Nights and decided that I wanted to celebrate Thanksgiving Ricky Bobby style. I started to incorporate pizza into my Thanksgiving routine; remembering to buy pizza on Thanksgiving Eve (Wednesday night) so I had food all day on Thursday =)

Todd and I became “boyfriend and girlfriend” the Sunday before Thanksgiving 2010. Todd remembers in vivid detail what that experience was like; joining my family for Thanksgiving. He was warmly welcomed by Uncle Denny as he spent his first Thanksgiving with us, even though we had only been officially boyfriend/girlfriend for less than a week.

Fast forward to my 30s, specifically in 2013, Thanksgiving was heartbreaking; I started my day in the NICU with my 35 week old premie Mikey, left the hospital for a few hours to visit Uncle Denny, Aunt Jacquie and family, then went to Uncle Dave and Aunt Rox’s to see my Grandma, and then spent the evening with Todd’s Mom and Grandma in the NICU with little Mikey. Instead of pizza, we had Steak and Shake, but I hated leaving my little guy alone in the hospital.

Thanksgiving 2014 was unremarkable; but sadly it was my last Thanksgiving with Uncle Denny. Thanksgiving as I knew it would never be the same so there was even less of a reason to appreciate the holiday. Since then, instead of even paying attention to Thanksgiving, I directed all my holiday and family celebration energy around that time to celebrating Mikey’s birthday since it will always fall on or around Thanksgiving.

I am “thankful” (see what I did there?) for one of my favorite pictures of my daughter Scarlett and me, that we took on Thanksgiving 2015. 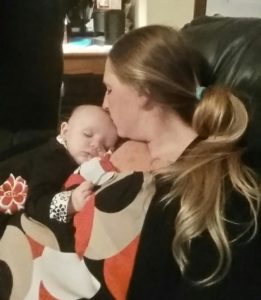 Thanksgiving 2016? I changed the game. No more regular Thanksgiving. I ventured on a journey with Todd, Oscar, Mikey, Scarlett, my mom and my dad from Indiana, through Ohio, through Pennsylvania and into New Jersey, all the way to the Atlantic Ocean. We roadtripped and visited Diggerland in New Jersey, Atlantic City, Hershey Park Christmas Candylane and a drive through Safari in Ohio on our drive home. BEST THANKSGIVING EVER!

Thanksgiving 2017; we planned on going to Alabama for another roadtrip but I had the opportunity to go to Europe for 10 days in early November 2017 and being 5 months pregnant, I had no interest in roadtripping with two toddlers and a teenager down to Alabama. BUT we’d make plans for Thanksgiving 2018.

So here we are, Thanksgiving Day 2018 and I’m writing this from an airplane flying from Chicago to Miami. I’m spending this Thanksgiving traveling with my husband (NO KIDS!) on a 9 day cruise through the Caribbean. We will not eat turkey. We will not eat mashed potatoes. We stopped at McDonalds, ate caramel and cheese corn at the airport, drank a beer at the airport bar and once we arrive in Miami we will scope out some local food.

All in all, I am thankful that I am able to travel and spend much needed vacation time with my husband. Next year, there will be a trip somewhere over Thanksgiving weekend too. You can count on it.

<< Previous Post Hustle Mom Hustle's First Thanksgiving!
Next Post >> 10 good things, 10 bad things, what are you going to choose to focus on?