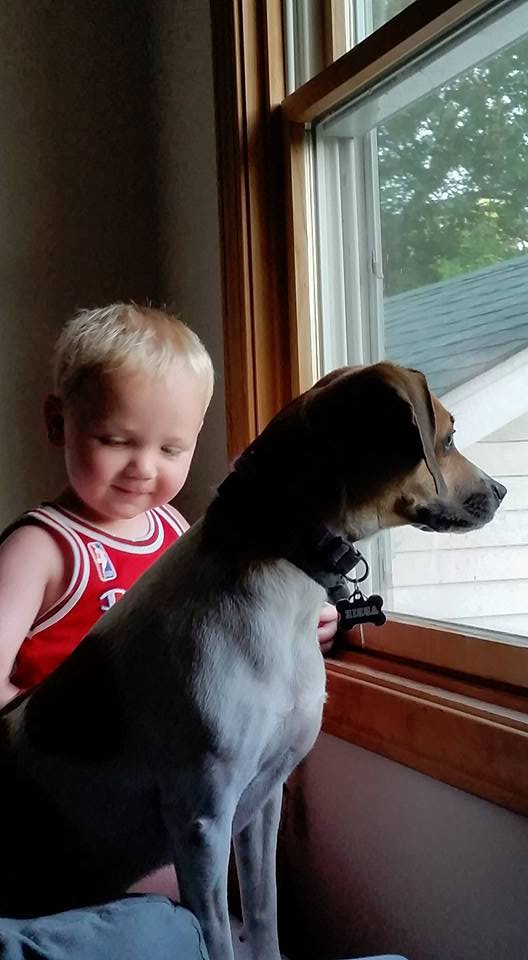 Tomorrow is June 8 and it will not be an easy day for our family. For the last 5 years our family Google Calendar has said “Abbie’s Happy Birthday” on this day.

It still says “Abbie’s Happy Birthday” because I don’t have the heart to delete it. Sadly though, we don’t have a 6th birthday to celebrate tomorrow.

Instead, we’ll be reflecting back on the short life of our little beagle dog, Abbie Dorothy Helgesen.

We rescued Abbie in the fall of 2012 after experiencing our first miscarriage. I had been crying all weekend and as we drove past the Lake County Jail, we saw the puppies getting exercise running around the fenced in areas of the Animal Shelter building. My husband suggested we go look at puppies to try to cheer ourselves up.

We saw so many animals in need of a home but we both instantly fell in love with a tiny beagle puppy who was just a few months old. I had never seen a beagle so small before. If I remember correctly she weighed 9 lbs when we rescued her. (That didn’t last long! We had to restrict Abbie’s eating a few years later because she was teetering on the obese side!)

Abbie had round floppy ears, a little yip, a waggly tail, and she had the most beautiful brown and white coloring. She was exactly the color of a football or a giraffe, except for her black nose. 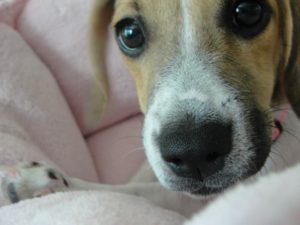 Abbie quickly became partners in crime with our 1 year old dog Toews. He was our big dog and she was our little dog. She was brown with white spots and he was white with brown spots. They both had round floppy ears and were best friends with each other and 11 year old Oscar. 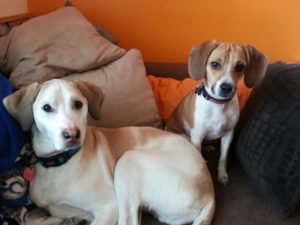 Toews was Oscar’s dog and Abbie quickly established herself as Todd’s dog. Toews was low maintenance but Abbie was not. She howled in her crate. She peed in the house. She chewed on underwear, shoes, and furniture. She climbed on the counters and table to eat food when we weren’t looking. She dug holes throughout our yard. But we loved that girl. 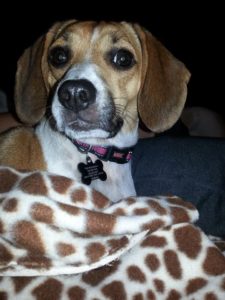 After one more miscarriage, we had our rainbow baby Michael in late 2013 and both dogs were enamored by him. Mikey could not have been better protected and the same was true when Scarlett was born in 2015. Sadly though, Abbie was injured in 2017 while I was pregnant and never had a chance to meet our youngest, Isabella. Abbie was such a good mama dog and took care of me during all my pregnancies. She loved my babies.

Even so, I’m not a dog person. I didn’t have a dog growing up and had no desire for one. Sometime in my twenties I made the mistake of watching Marley and Me and that sealed the deal – I wouldn’t ever want a dog because I couldn’t deal with falling in love with a dog just to have to say goodbye after 10ish short years.

But Todd was a dog person and Oscar wanted a dog so bad so I caved in. Toews was the first puppy that made me a Dog Mom and then came my Dog-ter Abbie. I had to say goodbye to Abbie much sooner than I expected to and I was full of guilt. After all, most of my attention was directed at my job and my kids and I kept thinking how I didn’t pay enough attention to the dogs that took such good care of me and my family.

It was the most awful Tuesday morning and I remember it vividly. It was the holiday season, and I was a pregnant, hormonal mess. That morning, Abbie was sitting still like a statue and didn’t move when she saw me or the kids. In the previous weeks we had a few episodes where it looked like she had a seizure and her legs and tail got stiff but it only lasted a few minutes. We figured her legs were asleep and she’d snap out of it soon but she didn’t. After taking the kids to school Todd took Abbie to the vet and he already knew things weren’t good. After some xrays the doctor explained to Todd that Abbie had spinal injuries that had been chronic and something snapped overnight and she was paralyzed. She talked about surgical options, post surgical care, costs, best and worst case scenarios, and my husband and I had to make the hardest decision I’ve ever had to make. I couldn’t stop crying or apologizing. I felt like shit because I couldn’t justify spending that kind of money, nor did I have the potential to take care of a special needs dog with my growing family. I made the choice to let her go and I don’t regret my choice but I hated the fact that I had to make it.

Oscar felt so guilty – like maybe she fell off his bed or they played outside too hard. He thought it was his fault and couldn’t stop thinking that she became paralyzed and hurt herself in his room while he was sleeping, unaware of her pain. The vet reassured us that this wasn’t a fluke accident – no one did anything wrong. The xrays showed she had been having spinal issues for a few years and it was not in the cards for Ms Abbie to have a long playful life. Even so, I could not stop crying and repeating “I’m so sorry” as she slipped away while I held her paw. While she only got to celebrate 5 birthdays she had a pretty good run full of memories and best friends. 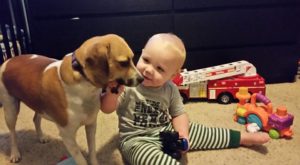 It’s been six months now and it’s still raw. Mikey talks about Abbie every single day. He talks to her in heaven. When he sees dogs on walks he says hi to them and tells the owner that he has one dog at home and one dog in heaven. When he sees the moon he talks to Abbie. The clouds remind him of Abbie. When he sees a giraffe or a football he remembers her fur colors and talks about her. Every once in awhile he says she’ll come back and play with him but he does know she won’t – he just doesn’t want to believe it.

Tomorrow is going to be hard but we’ll get through it together. The saying “it’s better to have loved than lost than to never have loved at all” is most applicable as I reflect on the impact Abbie has had on my life and my family’s lives in just a few short years.